A novel starts with an idea. Of course, it takes more than just an idea to create a novel – time, commitment, passion, all these things will be needed before an idea becomes a novel. But none of these things will make a novel if there is no idea to get them going. Ideas are the spark that light the flame, which sets light to the kindling, which creates the heat to start the burning, which ends with a full-blown bonfire that can’t easily be extinguished and a sky full of smoke. It only takes one idea to achieve all that, but nothing will happen without one.

Luckily, ideas are abundant and promiscuous. They flaunt themselves flirtatiously, begging to be written. Look at me, they say, wouldn’t I make the most glorious story? You and me together would make irresistible fiction. You would love to write me, readers would fall in love with me. Yes yes, I reply, you are brilliant, awe-inspiring, I want to write you all. But there are so many that most flare brightly for a brief moment, only to fade into obscurity, forgotten before any record can commit them to paper. Only the very brightest and best make me reach for a pen. Those lucky few make it to scribbles in a notebook, or a single page document of computer type. In solid form, they have a chance of life – a written idea can be read and remembered. I have collections of these ideas, going back to my teens. I still love each and every one of them, even though most will go no further than that.

From this collection come the ideas that grow bigger. I can never tell which ones will grow. Some are ones that I really want to write, like Arris. Other times they surprise me, swelling from nothing. Have You Got That Book? did that to me, going from spark to unstoppable inferno in a matter of hours. Others smoulder, building secretly and cunningly. By the time they take hold, they are too hot to leave alone.

That is how my next novel came to me. I had finished HYGTB? and I was meant to go back and finish Arris. But I didn’t. Some other idea crept in, one of those ideas that came from nowhere but waited patiently, until it had built itself so nicely that it couldn’t be ignored. I can’t even say for sure where the idea came from. I have this habit of turning whatever I am doing into a narrative. For example, if I’m cooking a meal, I’m not myself but a character cooking a vital meal for another character, usually with long, involved conversations. Or if I’m picking fruit in the garden, I am the character picking fruit, for some very important reason. Once, on a summer job entering data onto a computer, I became the heroine in an action thriller who discovers a sentient computer. And somewhere in the past, I turned the simple task of making lunch into an encounter between a rich, married woman and an insolent homeless man. The woman knows she is better off than the man, but also knows that when he mocks her marriage, he is not incorrect. He is rude to her, but she still wants to help him, and he seems happy to let her try. It doesn’t sound like much, does it? And yet, from that came a whole new novel.

What kindled this idea were a few simple details that gave it a time and place. It floated around for a long time in a vacuum with no date or location, until it occurred to me that setting this idea in the 1920s made it a story about the aftermath of the First World War. That made my sullen tramp a shell-shocked war hero, running away from horrors that refused to leave him alone. Here was something of real interest for readers, and offered me as the writer so much more scope for depth and intrigue. Suddenly, the simple idea about a rude, homeless man becomes a novel about his journey to recovery. But what about the woman? Why was she involved in this story, and why was her husband not? It was the location that provided her story, a country house with a neglected garden in need of restoration, a perfect place for an unhappily married woman to escape to. What if she discovered a new passion for gardening and horticulture, giving her a reason to stay? That became her place in the novel, saving the garden and the traumatised young man who was seeking sanctuary there. And that private, secluded garden would be the perfect place for an unlikely relationship to blossom. That’s an instantaneous plot, with interesting character development and an unusual romance. With these details fixed, everything else fell into place.

The notebook shows that I first recorded this idea on 18.8.99, with all those details already in place. At this point, I was well into HYGTB? and not really planning what my next novel might be. But by the time that was finished in 2000, it was the post-WWI novel that became my next project. I was now married and living with Hubby in a very small but cosy flat. I was still working at the bookshop and using my days off for writing. By now, I was working on a real computer, but always carried a lined exercise book around with me so I could write at work, or whenever I was away from the computer. One of these notebooks holds the very first words written, a patchwork square of drama. It is followed by notes about the plot, and plans for research that would be required. This entry is dated 14.11.00, so by then, I was well and truly committed to this idea. I did actually do some research too. It wasn’t something I had bothered with before, but I realised that I needed to know more about First World War shell shock than I had picked up from GCSE history and reading the novels of Pat Barker and Sebastian Faulks. I also knew nothing about gardening, and had to furnish myself with enough basic knowledge to make my character’s enthusiasm for the garden seem plausible. But I’m still not one of those writers who do so much research that they can include a bibliography with their novel. I prefer the bits that I can make up. And this novel was something I could really get my teeth into. I worked solidly on it for the next eighteen months, and by the time the first draft was finished, I knew that my style and technique were improving, and that this was the kind of fiction I really wanted to be writing. It was more restrained than HYGTB?, more grown-up, more thought-provoking, or so I hoped. I was very pleased with the first draft. There is no diary entry to show when it was finished but by the time we moved out of that flat at the end 2002, it was printed off and being passed around friends and family and being rejected by agents and publishers. And if you haven’t already worked it out, this is my novel After the Rain. From one little spark to a novel on Kindle. That’s why I love writing. 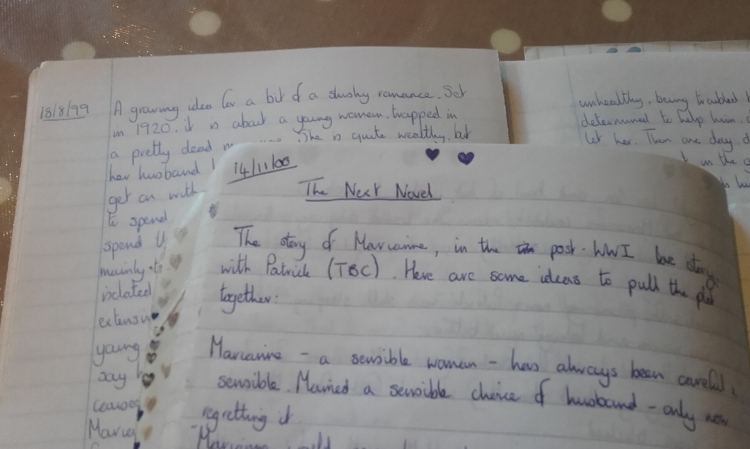 Notice the evidence of work in progress – Patrick (TBC) went on to become Justin.