These days, I love editing. I think I like it just as much as the process of writing original content. To me, it is just part of the process. I wouldn’t dream that anything I wrote could not be improved. These days, I edit as I am going along. When I read back, I can see where I was trying to fill a gap, and realise what I should I done instead. If I don’t like the direction a scene is going, I can change it and make it behave. I take great pleasure in slashing superfluous waffle or over heightened emotions. Sometimes, you just don’t know if something works until it’s written; if it doesn’t, it’s not a problem, because it can all be reworked and rewritten. A first draft is always just an opportunity for improvement, as is the second draft, and the third.

The problem is, THIS NEVER ENDS. There will never be a time when I think “Yep, that’s perfect.” Even if I did think it for a while, I would soon change my mind. This might make for better writing, but what’s the point of that if no-one ever reads it. There has to be a finished product for people to read. And to achieve a finished product, a writer has to get to a cut-off point, where they accept that it is the best it can be at that time and stop. There is no way of knowing when that point should be, and a writer might get it wrong. But they still have to make that decision.

Once I had finished the first draft of The Most Beloved Boy, I instantly started rewriting it. It had taken me so long to write that the beginning didn’t really match the second half of the novel, as I had developed new themes and ideas, and had honed the style I was going for. It was a pleasure to go back and make it the novel I wanted it to be. And I could have go on with that forever. However, with the goal of publishing on Kindle, I knew it had to be brought to an end eventually. It was also getting in the way of me starting any new projects, as it was consuming all my attention and imagination. I needed a break from it, but was finding that very hard to do. But then I discovered Nano Wrimo.

Actually, I was already aware of Nano Wrimo. If you haven’t heard if it, it is the National Novel Writing Month, a scheme that anybody can join and commit themselves to using the month of November to write 50,000 words. It’s quite a big commitment, requiring an average of 1666 words a day. When you sign up, you can track your progress on charts and see encouraging statistics. It is a great way to incentivize writing. If you reach the target by the end of the month, you get a certificate. More importantly, you have 50,000 words of writing, which might be a completed novel or at least a big chunk of novel to continue working on. For people who have always wanted to write a novel but didn’t know how to start, or never got around to it, it is a brilliant kick-start. However, I will admit that I was dismissive of the scheme. After all, 50,000 words was nothing to me. I had already written three novels much longer than that and I hadn’t needed encouragement to do that. I was also sceptical that 50,000 words written in just 30 days could be any good; one of the only ways to reach the target is write continuously and never go back and edit. What’s the point of 50,000 words of drivel?

Then, in the autumn of 2014, I realised that I did need incentive and encouragement – incentive to stop editing The Most Beloved Boy and encouragement to start something new. I already had the idea, I just needed to get on with it. So I went to the Nano Wrimo website and signed up. I was instantly hooked. You create a profile and add a synopsis of the novel you are planning to write. You can read other writers’ profiles. There are message boards where you can link up with other writers who are doing similar projects. You can make buddies, and encourage each other along (or compete, if you are that way inclined). There are inspirational blogs from successful authors, with advice and encouragement. And the charts are addictive; watching the daily word count go up is intensely satisfying.

So 1st November came around and I started writing a brand new novel. It was another old idea that new inspiration had given fresh life to. I will say more about the novel itself in my next blog, because I want to concentrate on this new way of writing. And it was new and exciting to me. I had the basic plot of the novel mapped out before I started, knowing how it was going to end and what themes it was going to deal with. But how it took shape sometimes surprised me, and the need to get something written introduced new ideas that I hadn’t been expecting. It was quite a challenge to write 1666 words every day – even for me, and I wasn’t working at that time and had all day to myself. It really was a case of writing, writing, writing, and not worrying too much about the quality. And I realised that it doesn’t really matter, as there is plenty of opportunity to go back at the end and edit. As I said before, you don’t always know if something works until it’s written. The point of Nano Wrimo is to get something written. After having all the time in the world to dilly dally over my writing, it was good to feel a deadline, and to have the urgency of having to write every day, like a job. I was determined to finish; my pride in myself as a writer would not permit me to fail. So I plugged away, making steady progress every day and reached the 50,000 word target by day 27. WOOHOO!

Needless to say, I now have a completely new opinion of Nana Wrimo. I think it’s a brilliant idea and I would recommend it, to anyone who ever had an idea, or anyone who imagined their name on the spine of a book, or even went so far as fantasising about bestseller charts and signing books in Waterstone’s. Because to get to that stage, you have to have written something, and 50,000 words is a very good start. And it’s fun. I have done it twice now, and a Nano Wrimo camp. If October comes around this year and I still haven’t started a new novel, I should sign myself up again and do it again. 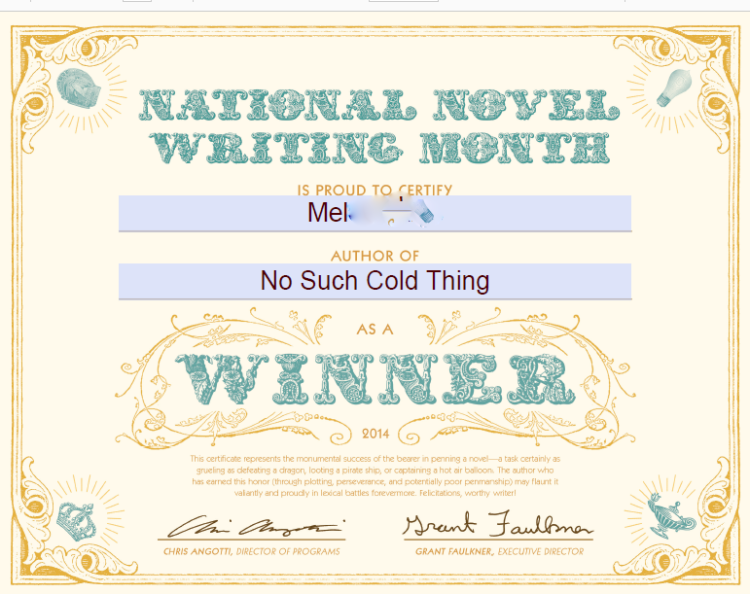